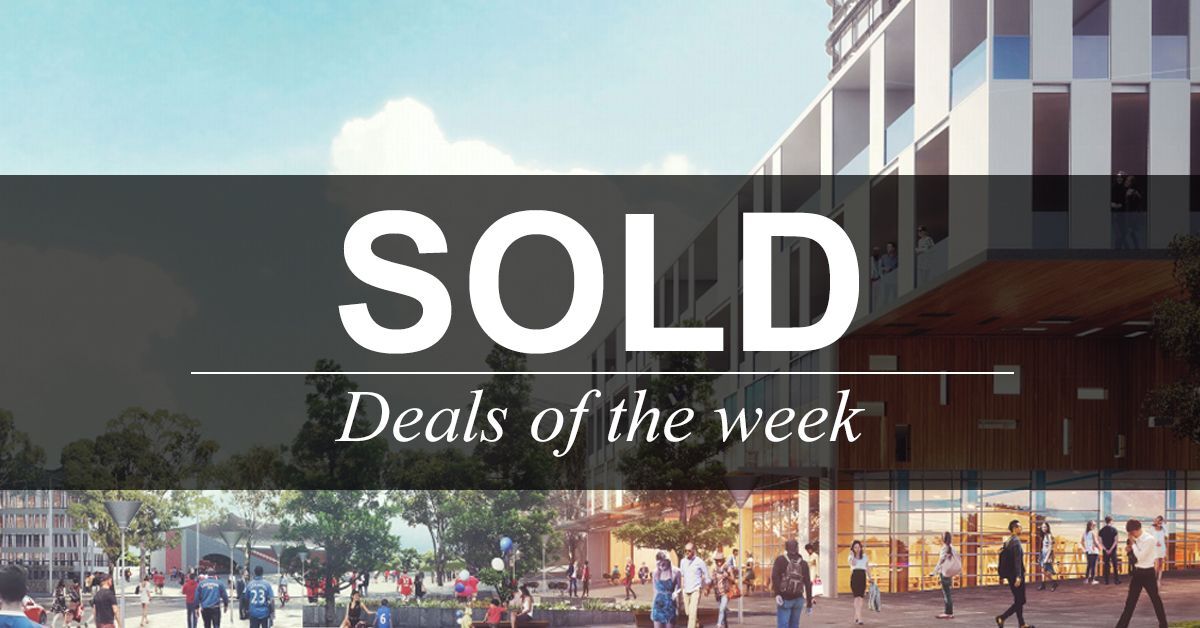 NUNAWADING - $3.68 million
A local investor has snapped up a fully-leased office freehold in Nunawading prior to auction for $3.68 million.

The site at 1-3 Rooks Road in Nunawading, situated 18-kilomtres east of Melbourne’s CBD, encompasses 1,465sqm of land. The property holds attractive positioning, close to the Golden Mile precinct, and was sold fully leased to five long-standing tenants including St John of God Accord.

Mr Diston said there was a strong demand in the Nunawading area for freehold investments that had development upsides.

PYRMONT - Undisclosed (~$200 million)
A major City of Sydney site in Pyrmont has been secured by local developer Landream, who have announced plans for a landmark, mixed-use project.

The 1.2-hectare former council depot, generated significant interest from the market, however the final sale price has remained undisclosed. Estimates in September of 2018 put the end sale price at $200 million plus.

The new owners have committed to deliver a childcare centre and a multi-use, indoor recreational centre for the local community as part of the project. A fully accessible site link connecting Wattle and James Streets will also be included to improve public access.

SHOWGROUND - $40 million
Ecospective Property have entered one of Sydney’s newest suburbs, Showground, with the purchase of a 1-hectare development site for $40 million.

The recently secured site encompasses around 9,634sqm and is an amalgamation of 11 different properties on Carrington Road in Castle Hill. The site retains plans to build a multi-stage project of about 300 apartments across several mid-rise buildings.

Showground is set to benefit from a new metro train station which will take commuters to the city centre in around 45 minutes. The NSW Government has rezoned around 270-hectares of land around the new station in an effort to entice development. A new town centre is planned along with 5,000 new homes over the next 20 years.

While no price has been released, the property is valued, and believed to have sold for, $2.6 to $2.7 million.

Ray White Commercial selling agent Christian Minards said that the sale achieved a record result for rate per square metre for the development.

“The development of Barangaroo has created a surge in sale prices at King Street Wharf, which until recently have been priced at around $10,000 per sqm. We’re now seeing prices climbing to over $14,500 per sqm,” he said.

“The lack of supply of quality strata offices and strong demand from buyers is continuing to drive strata office prices.

Previous owners Dundale had held the land for the past 20 years and chose to divest it through an off-market sale.

The rural and rural-residential subdivision property, situated at 96 Raynbird Road, is zoned Next Generation Residential under the Moreton Bay Region Council. Satterley plans to subdivide the site into 620 residential allotments and has secured development approval for the first three stages of the project, already beginning civil works on the site.

CBRE’s Dillon Murphy handled the sale stating that the site held significant appeal being “centrally located in the Moreton Bay Region – one of the fastest growing areas in Australia.”

“Future residents will be attracted to local amenities, the public transport network and the development’s proximity to the Sunshine Coast,” Mr Murphy said.

BURPENGARY - $9 million +
A multi-purpose service station at 148 Station Road in Burpengary has sold for over $9 million reflecting a strong demand for this growing district. Burpengary is recognised as a growing suburb just 35 kilometres north of the Brisbane CBD.

The 5,802sqm site, which consisted of a 7-Eleven Service Station, Hog’s Express drive-thru and IMO car wash, was sold on behalf of MatchBox Property Group and Hargreaves Property Group.

The property formed part of a larger four-lot staged retail precinct being developed by the joint-venture partners.

“The sales campaign attracted in excess of 150 enquiries and we finished up with 12 expressions of interest. This shows that potential buyers really appreciated the opportunity that was on offer,” Mr Stephen Kidd reported.