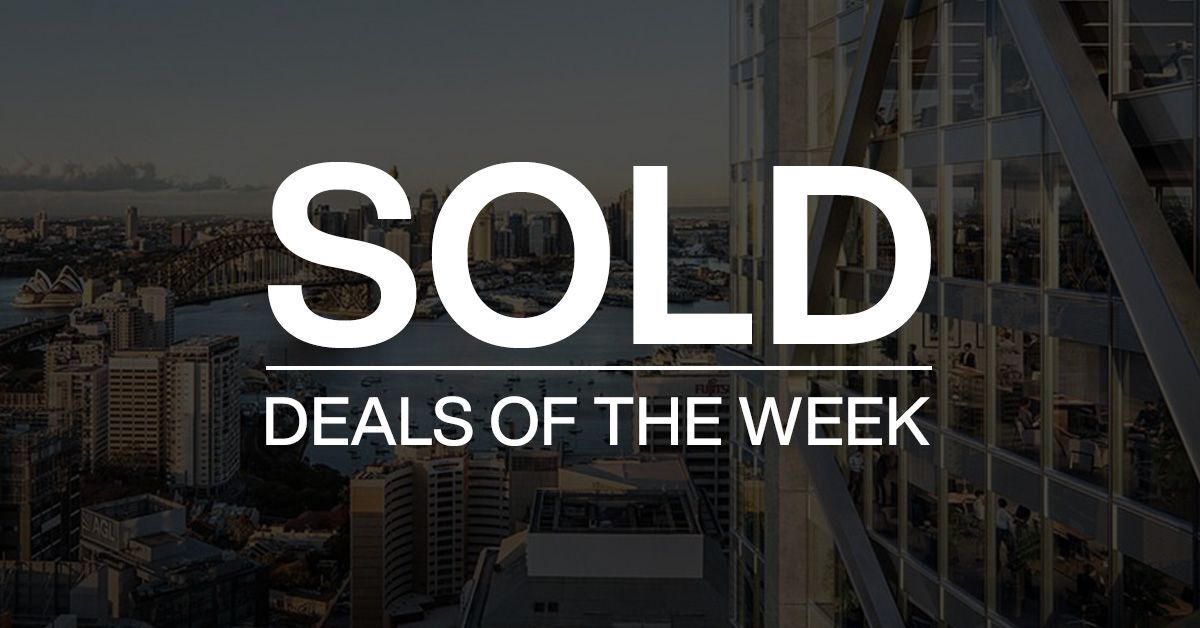 NORTH SYDNEY - $273 million
Dexus has traded in a North Sydney office tower to Hong Kong investor Huge Linkage for $273 million – a 3% premium on its book value as of 30 June 2020.

“We're selling assets at book value and we're buying back our stock at more than a 20 per cent discount to NTA.” Mr Du Vernet said.

ORANGE & COOTAMUNDRA - $37.25 million
Parkstone, an Adelaide-based fund manager has scooped up to regional shopping centres in NSW for a combined $37.25 million.

WOLLONGONG - $35 million
US private equity group Blackstone has offloaded the Bayview Centre, a smaller-sized shopping centre south of Wollongong, for $35 million as part of its strategy to sell down its Australian retail portfolio.

Queensland-based private developer Griffith Capital, picked up the retail asset, which offers 36,000sqm of land and has a GLA of 16,000sqm. The property is anchored by McDonald’s and Liquorland.

It is believed that Griffith Capital will reposition the asset, looking to redevelop the former Bunnings warehouse space as well as to make use of surplus land on the site.

JLL and Stonebridge negotiated the sale.

BALMAIN - $12.5 million
A private investor has splashed out $12.5 million for an apartment block in Sydney’s inner-west in the latest example of buyers searching for safe-haven investments.

Located at 24 Wisbeach Street, Balmain, the standalone apartment block occupies a site area of circa 1,062sqm and has a net lettable of approximately 918sqm. It includes six studios, 12 one-bedroom and six two-bedroom apartments, with 24 car spaces and additional visitor parking.

Located at 458 Wickham Street, the 1,275sqm site has long been the home of the PCYC Fortitude Valley. The site was sold with development approval for a new facility for the PCYC, as well as a 12-storey office building on the subdivided subject site; Willemsen Group, however, are expected to propose a redesign for approval by Christmas.

EIGHT MILE PLAINS - $10.8 million
Redhill Partners, a Perth-based real estate syndicator, has also made a move in the Queensland capital, this time securing an office building from Benlee Property Trusts for $10.8 million.

Located in the Brisbane Technology Park, in Eight Mile Plains, the  3,937sqm site presents a 1,984sqm building area and was sold fully leased. Queensland Health occupies close to three-quarters of the building with the remainder leased by veterinary services company Covetrus.

BRENDALE - $5.9 million
The Moreton Bay Region suburb of Brendale has become a hotbed of owner-occupier activity in recent times as three commercial properties sold for a combined total value of $5.9 million.

The stand-out sale of the three came at 14 Maxwell Street as the trio sold the 1,403sqm office and warehouse to owner-occupier Tara Forklifts for $2.76 million.

“These three sales in the New Base Estate shows that Brendale and the north Brisbane market as a whole are still in a great position,” Mr Aleckson said.

“Unit two at 25 Kingsbury and 14 Maxwell Street were sold sight unseen by the directors of the companies – with the local managers making the final decisions due to COVID-19 restrictions set in place. It was a real compliment to the design and construction of the buildings.”

WEST MELBOURNE - $7.1 million
A West Melbourne warehouse-converted-office, which was once the headquarters of Mushroom Music (then Reebok Australia), has recently been sold to educator Haileybury for $7.1 million, who have announced plans to expand its city campus, as reported by realestatesource.com.au.

Located at 27-31 Dudley Street, the school have also signed a nearly 100-year-long lease, two years ago, for a 1,028sqm block abutting the new site, which is home to St James Old Cathedral. This, coupled with the new site, located at 27-31 Dudley Street, gives Haileybury a development footprint of 1,641sqm. Haileybury currently owns and runs a vertical school in Kings Street, which they purchased in 2015 for $50 million.

60 Wakefield Street and 21 Divett Place, Adelaide boast a 12 year triple net lease to the SA Government, and comprise a significant 4,500sqm land holding in the core of the CBD.

Built by the South Australian Government in the late 70s and 80s, the properties were significantly upgraded and refurbished in 2001/2002 and again in 2016/2017 and provide quality accommodation for the State Government Departments who occupy both buildings.

60 Wakefield Street is a 6,900sq m six level building on a 3,200sq m site and includes a ground floor, four upper levels of office space as well as a basement car park for 35 cars. An elevated link bridge at Level 4 connects to 21 Divett Place.

Located at 75 Hindmarsh Square, the six-level building offers 4,700sqm of NLA and is currently leased to Nova Entertainment, Lidums Dental and the Office of the National Rail Safety Regulator with average weighted lease expiry of 3.8 years. The asset previously sold for $21.8 million in 2007.

Orange NSW, Vermont VIC, Hobart TAS - $112.8 million
Funds management platform Centuria Capital Group has made significant moves in the private day and short-stay hospital sector, splashing out a total of $112.8 million for controlling interest in three assets; the Bloomfield Medical Centre in Orange NSW for $55.5 million, the Vermont South Medical Centre in Melbourne's outer ring for $51.7 million and a day surgery in Hobart for $5.6 million.

The assets will be added to a recently launched unlisted Centuria Healthcare Property Fund, which includes several smaller properties and will now value the fund at over $155 million.